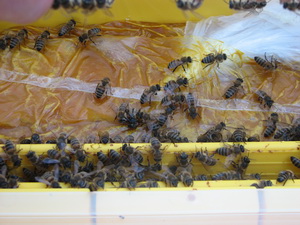 We may state that, as a result of modified environmental conditions, the opinion often expressed by reputable technical writers and beekeepers that there is no need for pollen supplementation is dated.For this reason we have worked out Fendpoll, a specially prepared pollen substitute with a unique composition.Feeding bees Fendpoll at the right time and in the right way can be highly important in order to preserve their resistance. With its help a part of the losses caused by CCD can be prevented. It helps in fighting nosemosis. It reduces the harm done by varroa. It makes beekeeping safer. In certain cases its application may prevent catastrophic losses. It indirectly increases honey yield.Let us examine when the product can be useful.Autumn application:Firstly in autumn, right before preparing for winter and secondly in summer in the droughty season and thirdly in early spring before the start of intensive foraging and if the weather gets cool in April. Perhaps autumn application is the most spectacular one for beekeepers. Its essence is that when intensive autumn forage stops (which usually occurs around 20 August in Hungary) breeding is still extensive in many colonies. If Fendpoll is applied in the right quantities at this time and application is advisable to be continued until the middle of October, it may not only increase the number of bees being able to winter with as much as 10-20 per cent, but will also enhance the vitality of wintered bees.My research of bee colonies suffering from CCD showed that Fendpoll fed in autumn increased the number of colonies being able to winter significantly.Summer application: 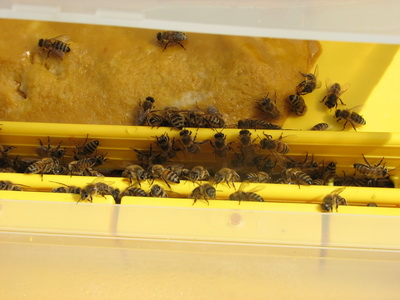 Feeding Fendpoll in the summer may be called for by poor bee pastures and/or the onset of droughts. With the application of the product summer nosema retreated in a large number of cases during the tests and no CCD symptoms appeared. When can the product be necessary in the summer? The metabolism of summer bees is very fast and therefore their resources may quickly be exploited. In addition, they do not create reservoirs in their body as winter bees do (except during the period before swarming). Pollen quality generally deteriorates by the end of June and protein content is often less than fifteen per cent.Spring application:If Fendpoll is fed in the summer, autumn and spring, the level of nosema infection can markedly decrease while the colony’s development will become dynamic. We cannot expect miracle from spring feeding. Although the development of the colonies who overwintered only poorly may accelerate if pollen product is applied, they cannot reach the development level of healthy, well-wintered and strong bee colonies, since they can only utilise the product at a lesser degree. We have to face the fact that the really vital issues were resolved a lot earlier, in the summer or autumn.

How to decide whether Fendpoll is needed?If there is a large bee pasture yielding good pollen, Fendpoll’s application is unnecessary. In the case of a serious mite infection or in the above-described cases, its continuous application is by all means recommended. The emphasis is in continuity. Let us leave it to the bees how much they eat of it.Why is pollen the base material of Fendpoll?Pollen has meant survival for the bees for millions of years. The continuous interaction between flowers and bees for millions of years have created the mutually most beneficial result: pollen. Honey bees have evolved so that they can collect and utilise pollen most efficiently. Their digestion has adapted to pollen too. High-quality pollen fits the bees’ physiological demands entirely. It also contains amino acids, vitamins, micro elements, lipids and fibres that are important for the bees. A further advantage is that it contains components that cannot be found in other artificial pollen substitutes (hormones, certain vitamins, flavonoids and structural fibres), and these, due to the lack of related knowledge, the inadequate level of science and technology or extreme costs, are not expected to be modelled properly in the near future.Fendpoll is a mixture of several high-quality pollens. It ensures an optimum composition for bees.Fendpoll contains adequately decontaminated pollens so it will not spread diseases.Fendpoll only contains pollens carried to the beehive by honey bees.Fendpoll contains pollens that are biologically and chemically controlled for pesticides.Fendpoll only contains materials that can be found in the beehive under natural circumstances.Fendpoll is expected to be available from the summer of 2010.